You are here: Home > Clean Air

Clean air is the air which we want to breathe. Good air quality is when air pollution is below limits set for good health. Clean air also meets our concerns about climate change: it's more than a local phenomenon. Air is between us; and between our conflicting needs and wants for ourselves and the space in which we live. It's contested.

The air around us 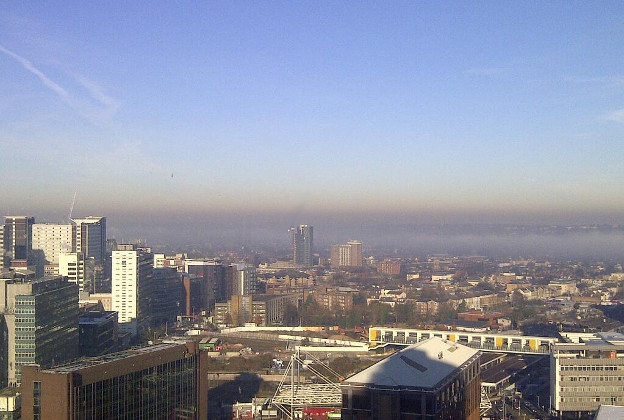 In the context of outdoor air ('ambient air'), the smogs of the 1950s and in particular the 'Great London Smog' of 1952 are well recorded. About 4,000 people are thought to have died in the immediate aftermath of that smog. Now, concern about air quality is the air pollution which is less visible than the belching chimneys of industry and domestic coal fires of the 1950s. Today, the sources of air pollution vary but air pollution from vehicles is the most prevalent source in most towns and cities. This pollution is mostly invisible and diffuse.

The effects of air pollution on human health vary according to the type of pollution, exposure, and people's susceptibility though age, previous illness, and other factors. Babies, older people, and those with a medical condition: heart conditions or respiratory diseases for example, are particularly at risk. A reduction in the quality of life, and reduced life expectancy are attributed to air pollution. Traffic pollution imposes an increased risk for those living nearby. Almost everyone will be affected at some point in their lives.

The UK Government is advised by COMEAP (The Committee on the Medical Effects of Air Pollutants) which 'provides independent advice to government departments and agencies on how air pollution impacts on health'.

In their report The Mortality Effects of Long-Term Exposure to Particulate Air Pollution in the United Kingdom (2010) they say:

The current (2008) burden of anthropogenic particulate matter air pollution [PM2.5] is, with some simplifying assumptions, an effect on mortality in 2008 equivalent to nearly 29,000 deaths in the UK at typical ages and an associated loss of total population life of 340,000 life-years. The burden can also be represented as a loss of life expectancy from birth of approximately six months.

The uncertainties in these estimates need to be recognised: they could vary from about a sixth to double the figures shown.

COMEAP provide estimates of deaths attributed to particulate air pollution (PM2.5) - its mortality burden, but they do not recommend a figure for estimates related to nitrogen dioxide air pollution alone. Their published papers describe their approach and the difficulties associated with its calculation, noting that often it occurs with other pollutants from similar sources eg. road traffic. See their report Nitrogen dioxide: interim view on long-term average concentrations and mortality.

In August 2018 after further deliberation, COMEAP published its considered view of deaths attributed to nitrogen dioxide (NO2) air pollution. The Commitee was unable to reach a consensus view for NO2 alone and instead preferred a combined figure for NO2 and PM2.5 air pollution rather than NO2 alone. In the Executive Summary (page 18) of Associations of long-term average concentrations of nitrogen dioxide with mortality, COMEAP estimate the mortality burden of NO2 pollution and PM2.5 particulate pollution combined as:

the range of central estimates of the mortality burden of long-term exposure to the air pollution mixture in 2013 in the UK was an effect equivalent to 28,000 to 36,000 deaths at typical ages, associated with a loss of 328,000 – 416,000 life years, when effects down to zero concentration were included.

The Government's Department of Environment, Food and Rural Affairs (Defra) provide a figure of 23,500 attributable deaths to nitrogen dioxide (NO2) alone in a 2015 report 'Valuing impacts on air quality: Updates in valuing changes in emissions of Oxides of Nitrogen (NOX) and concentrations of Nitrogen Dioxide (NO2)'.

A combined figure for the mortality burden of air pollution (including PM2.5 particulates and NO2) is given by Royal College of Paediatrics & Child Health (RCPCH) and the Royal College of Physicians (RCP) who said in February 2016 that 'Each year in the UK, around 40,000 deaths are attributable to exposure to outdoor air pollution, with more linked also to exposure to indoor pollutants' (reference below).

Air pollution in the UK

Air pollutants and air quality in outdoor air ('ambient air') are controlled by laws including legislation from European Union directives. However, national Government and local authorities have not prioritised polices and enforcement (regulation) for better air quality and clean air. When faced with difficult political choices, public concern about air pollution has been ignored even though there are air pollution laws to protect public health. Emission standards for new vehicles have been insufficient to maintain air quality. Furthermore, excessive vehicle use with an increasing proportion of vehicles with diesel engines, has worsened some forms of air pollution especially those directly linked to ill health. There is a growing awareness of the need for change.

Individuals and organisations have lodged complaints with the European Commission about the failure of the UK Government to maintain air quality set down in law. One organisation took the UK Government to court for breaking the law, forcing a new air quality strategy to be published in 2017. However, many of the measures which it contained were inadequate. Change is possible when there is public demand: the smogs of the 1950s were stopped with the introduction of the Clean Air Act 1956. This created smoke control areas and it stop the burning of untreated coal in domestic fires. Today, effective polices and programmes are need for the new pollutants.

All of the pollutants listed above have traffic pollution as a source. Carbon monoxide is another gas which is commonly associated with traffic pollution but it is emitted in the home from faulty cooking and heating equipment. Other sources of air pollution from human activity include: domestic heating; power stations, waste incinerators, petro-chemical sites, manufacturing and extractive industries. Particular pollutants are associated with specific activities e.g sulphur dioxide emissions are associated with power stations, steel works and petro-chemical sites. Dust is a common nusence from construction and waste sites. There are also air pollutants from natural sources such as pollen which may be present as particulate size particles; dust from soils; salt from oceans, etc.

Polycyclic aromatic hydrocarbons (PAHs) are substances which are present as gases or which bind to particles. They can be highly toxic even in low concentrations. Metals such as mercury, lead, arsenic and nickel can also occur as pollutants e.g mercury vapour or in particulates. Volatile organic compounds (VOCs) such as benzene, 1,3-butadiene and formaldehyde which occur as gases, are also pollutants. License or permits are usually needed for their storage or discharge into the environment from industrial sites but they may also occur in products used by the public.

Environment is a devolved matter: Scotland, Wales and Northern Ireland are responsible for their own environmental policy. However, it is the UK Government which ensures - or should ensure - that nationally, our laws meet European directives and that these laws are not broken. If limits are exceeded then infringement proceedings may be brought in the European Court of Justice. Relevant legislation to air quality (ambient air) includes: Part IV of The Environment Act 1995 ; Air Quality (Standards) Regulations 2010 which transposes into English law the requirements of Directives 2008/50/EC and 2004/107/EC on ambient air quality (equivalent regulations have been made by the devolved administrations; and Air Quality (England) Regulations 2000 sets national objectives for local authorities in England.

News about air quality and health

For the latest developments in science about air quality/ air pollution and health, read Health Effects of Air Quality and Noise - Update.