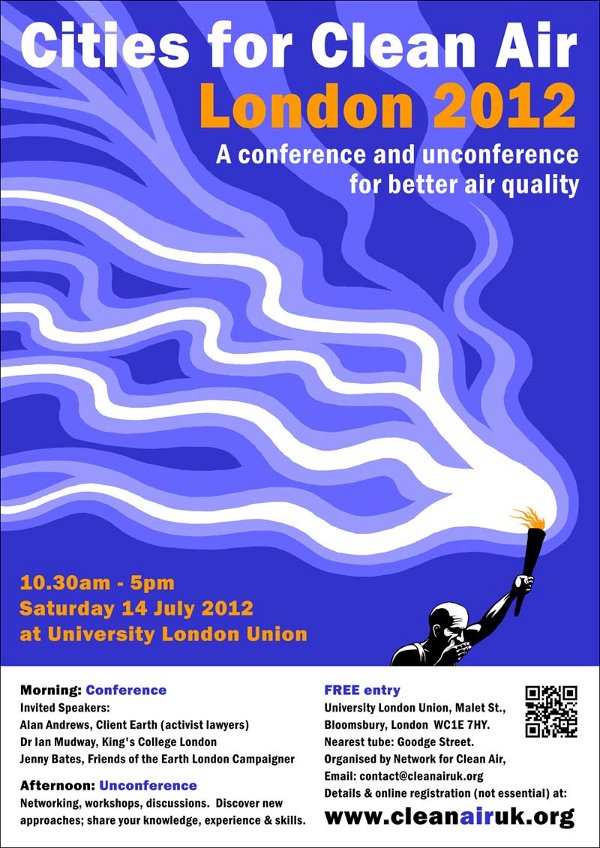 Publicity materials distributed priot to the conference included the poster above (and another, PDF), the pre-conference webpage, the press release (below), and a letter published in the Guardian newspaper (letter, 17 June 2012).

Call for Olympic air for London 2012 Olympics and beyond at air quality event, London 14 July 2012

LONDON, 14 JULY 2012: On Saturday 14 July from 10.30 am – 5 pm at University London Union (Malet Street, Bloomsbury, London WC1E 7HY), a conference (and 'unconference') with invited speakers and networking, aims to inspire public involvement in the movement for less air pollution and better air quality. The day long event is about two weeks prior to the opening of the London 2012 Olympics.

The conference consists of invited speakers in the morning, and an 'unconference' (networking, workshops, discussions) in the afternoon. The invited speakers are: Alan Andrews, Client Earth (Activist Lawyers) presenting 'Legal Action for Clean Air in the UK'; Dr Ian Mudway, MRC-HPA Centre for Environment and Health, King's College London presenting 'Why Air Pollution is Bad for Human Health'; and Jenny Bates, Friends of the Earth London Campaigner presenting 'London Air: the Politics, the Vision'.

“There's now increasing momentum for better air quality in this country, especially in the seventeen places where the Government is breaching EU regulations. Better air quality reduces sickness and ill health; combats climate change and improves the quality of life for all.”
“London has some of the worst air pollution in the country. It needs to change from The Big Smoke to a city with Olympic air every day of the year.”

There are seventeen places in the UK which will not achieve limits for harmful air pollution (NO2) within legal EU limits by 1 January 2015. Indeed, one of them, Greater London - won't achieve these limits until about 2025. Local authorities and national government need the engagement of civil society to bring forth adequate measures to control pollutants, improve public health and the quality of life. In London alone, poor air quality leads to the premature death of about four thousand people annually (that’s about the same as the ‘great smog’ of December 1952).