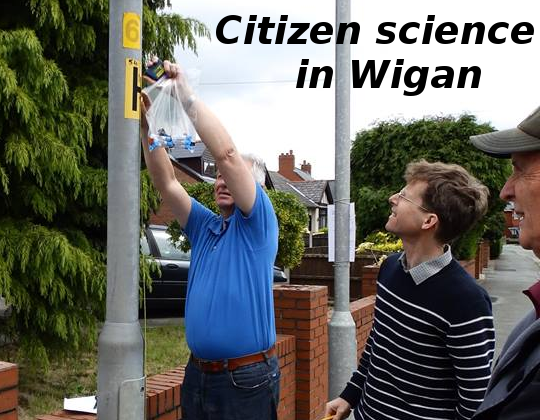 The Almond Brook Link Road is a developer funded road which was proposed to accompany two large housing estate developments in Standish. The Stop Almond Brook Link Road are concerned about increased traffic, traffic congestion and air pollution from the link road. The proposed road would be constructed next to the playing fields of Standish High School. The residents group preferred access roads rather than a link road. Furthermore, they considered Wigan Borough Council's traffic study/modelling didn't address induced traffic: "the study does not include any data on the extra traffic which would use the link road as a quick cut to Chorley from J27 of the M6, rather than coming off at J28. Likewise, there is no data on the traffic which would come down the link road to the motorway from the Chorley area". The transport plan for the proposed development in Standish also showed inadequate analysis; little investigation of sustainable transport measures; and no demand management techniques.

Concerns about air pollution from the proposed Almond Brook Link Road were raised by a local doctor and reported in the local newspaper in 2014 (Wigan Evening Post/Observer): 'Dr Imran Aziz, who is a consultant chest physician with the Wrightington, Wigan and Leigh (WWL) NHS Foundation Trust, has expressed concerns about the £5m Almond Brook link road in Standish proposed by Wigan Council, saying it could increase the risk of young people developing asthma.' reported Wigan Today in its article of 20 February 'Top doctor warns of link road health timebomb'. The Council denied the claims in an article on 27 February 'Council anger at link road asthma claims'.

In June 2014, Wigan Borough Council gave outline permission for the proposed housing estates and the link road. The Council's response to the campaign opposing the road was to reduce the speed limit on the proposed link road to 20 mph and include traffic claming measures. However, the road remained a through-road rather than access roads for the proposed estates. You can read a letter of objection to the developement and link road

Stop Almond Brook Link Road set up gas diffusion tubes to monitor Nitrogen Dioxide pollution at 25 sites in spring/summer 2014; and there were results for 19 of the monitors (as some were removed/stolen). 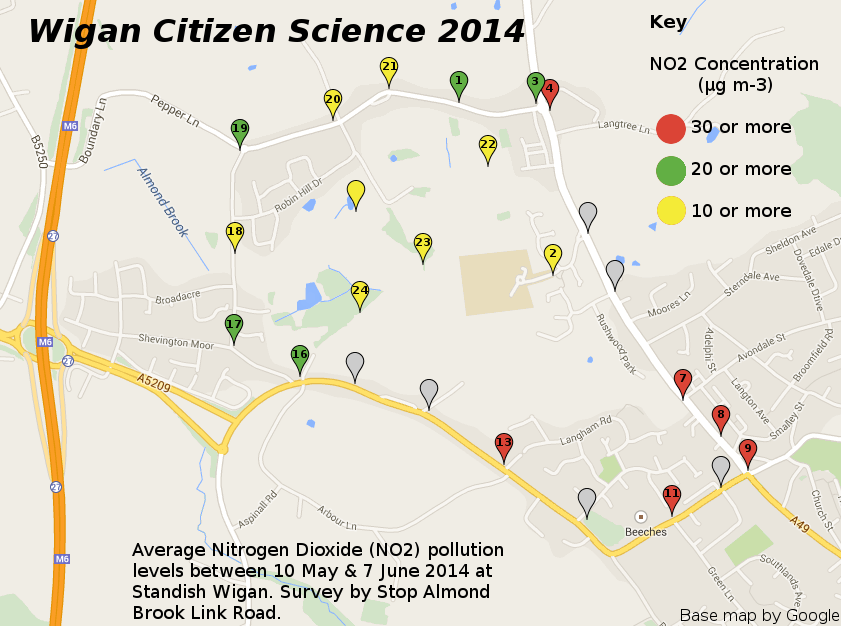 Survey Results: Map above, shows locations of air pollution monitoring; Table of results which shows that after a bias had been applied to the pollution measurements, none of the sites exceeded the annual mean limit for NO2 air pollution (40 μg m-3) for period 7 May - 7 June 2014. Some results were elavated or close to the pollution limit. The detailed results are here (PDF). A scalable map is here (Google map)

Dialogue with the council & media work

Stop Almond Brook Link Road wrote to Wigan Borough Council and asked that the Council wait on the results of their air pollution survey which had started in May 2014, before making a decision about the proposed estates and their link road. However, the council refused to wait; and considered the planning application at a meeting where outline planning permission was given to the developers (Bloor Homes and Wainhomes). Stop Almond Brook Link Road publicised their survey with a press release (see below 'RESIDENTS CARRY OUT POLLUTION STUDY'), and an article appeared in the local paper (Pollution investigation over link road', Wigan Observer, 19 June 2014)

CAMPAIGNERS against a controversial link road have conducted a ‘citizen science’ project to measure traffic pollution in their congested village.Stop Almond Brook Link Road (SABLR) has monitored the air quality around Standish as part of its campaign against a proposed through road from Almond Brook Road to Pepper Lane, which is part of plans for two estates of 600 houses in total.

The Network for Clean Air, a national campaign group which works with communities for less air pollution and better air quality, has chosen Standish for the project after studying the plans for the £5m road, which would go through open countryside and next to the playing fields at Standish High School. With the help from the Network for Clean Air, SABLR put up test-tubes which measure nitrogen dioxide levels along main routes in the village and in the area earmarked for the link road.

In all, 19 locations have been surveyed along Old Pepper Lane, Pepper Lane, Preston Road, School Lane and Almond Brook Road, as well as sites near Standish High School and next to a Site of Biological Interest. An independent laboratory is now collating the results of the study, which will give a snapshot of air pollution in the area.

“Almond Brook Road and Preston Road have been designated by Wigan Council as Air Quality Management Areas, which means pollution limits have been broken in the past and the council has said it is committed to not increasing harmful emissions.

“This link road, and the applications for housing associated with it, will drive a coach and horses through that policy.

“People are now much more aware of how harmful exhaust pollution is to health, especially to children, and many residents are concerned that this road will make pollution worse, especially near Standish High.”

In February, Wigan’s top asthma doctor warned that the health of school children at Standish High could be harmed by exhaust fumes from the link road. Dr Imran Aziz, who is a consultant chest physician with the Wrightington, Wigan and Leigh (WWL) NHS Foundation Trust, wrote to the council asking for the route of the road to be changed as it could increase the risk of young people developing asthma.

“The council now acknowledges that this link road will not ease congestion in the centre of Standish and it may make things worse by attracting traffic from the M6 travelling to Chorley.”

It is expected that the results of the ‘citizen science’ survey will be available in three weeks’ time and SABLR has asked Wigan Council to wait for the results before putting the applications before the planning committee.

“Neither the developers nor the council has undertaken a study of this comprehensive nature and so councillors will no doubt want to wait to see the results before they take any decision on this road.”

“Wigan Council's assessment of traffic levels for the link road are flawed.

“The plans associated with the proposed link road state that it is a strategic route to and from the M6 motorway. That will bring additional traffic congestion, traffic blight and pollution to Standish and Wigan.

“The council needs to consider only access roads for the new housing and not a through route. That would comply with its planning policies to limit air pollution.”

“That would reduce traffic and air pollution, and increase health and well-being.”

For more information on Network for Clean Air, go to www.cleanairuk.org